Most little girls play with Barbies and dream of becoming princesses. I, on the other hand, played with lego, and dreamed of designing a sky scraper. Unusual for little girls, I know, but I’ve always been slightly unusual.
I figured that if I wanted to be successful in life and materialise my dream, I would have to marry and extremely wealthy man. (Preferably one with similar or identical genes to Brad Pitt.) As I was only 18 when I left school, this was not an option, so I turned to the second best thing – University. And so my journey started…

The gap between school and university was larger than what I thought it would be. I juggled the Stellenbosch University Choir, PSO hockey, a hint of a social life AND actually passing in my first year. Finding the balance was a challenge, but I was taught to accept challenges and view problems as opportunities. This attitude came in handy after receiving my first test-week’s results. I didn’t think that it was possible for me to achieve lower than 80% for anything, let alone fail at something! Alas, I failed my first test during my first test-week of university. This only encouraged me to work harder. MUCH harder…And after many nights of studying that lapsed into the early morning hours, I was able to write and pass all of my first semester’s exams.

By the time the second semester came, I was prepared for it. Or at least I thought I was. One can never truly be prepared for all of the surprises that an Engineering degree offers. Nevertheless, I somehow managed to pass all of my first year subjects and make unforgettable memories as first year was full of rewarding “firsts”. I can proudly say that I read my first book from beginning to end in my first year. I explored the civil cement lab (it’s like a miniature Hogwarts) for the first time. I even learned how to cook! Very rewarding indeed…

I felt super cool at the start of my second year. I wanted to be more involved in engineering activities so I joined various committees. During welcoming week, I joined the safety committee. It was the first time that I had a valid excuse to wear a hard hat.I learned a lot about safety precautions and was privileged enough to share some of my new learned knowledge with the first years of 2014.

The experience of speaking to large groups of people in the interest of a common goal ignited a fire in me that I never knew that I had. I realised that I have a passion for people, and I wanted to continue helping people. This passion grew stronger and I decided that I want to devote my life to helping those who can’t help themselves. It was as if I was thinking out loud, because the very next week, I heard about a society called “Engineers without Borders” (EWB). EWB is a mimic of “Doctors without Borders”. In short, it’s a society that gives back to the community, a society made up of engineers and engineering students that use their engineering knowledge to help those who don’t have the means to help themselves.

Another committee that caught my eye was the “trapkarre” committee. The annual “trapkarre” races are not to be missed! This is definitely one of the coolest events that the Engineering Faculty hosts. Each department in the faculty is invited to build their very own “trapkar”. The faculties race around campus in two categories, namely; the sprint and the endurance race. The Civil Department won both races last year. They even let me pedal the faculty car for one lap. This is an event that I was proud to be a part of.

A period of 4 consecutive weeks of vacation training is required from second and third year civil engineering students and so I started my first week of vacation training in the first week of my June holiday. During this time, I learned a lot! How people operate under pressure, how the theory we learn now is applied to real life situations, how epic civil engineering actually is and the importance of caffeine. I met many wonderful people during this period that taught me that hard work pays off and that allthe blood, sweat and tears are worth it in the end. I look forward to meeting them again someday.

After my 4 consecutive weeks of waking up at 5 am and sitting in the afternoon traffic for roughly two hours every day, I was rewarded with a life changing opportunity. I was privileged enough to go on a European tour with the University Choir. Proof, yet again, that hard work pays off. The choir competed in three different categories in the World Choir Games in Latvia, bringing home the title of “The Best Choir in the World”. It was an absolute honour to be a part of the 2014 winning team. The choir took a lot of my time in my first and second year. We practised for a minimum of six hours per week. (Three hours on a Tuesday and three hours on a Wednesday.) I regret none of it. It was time well spent.

The second semester of my second year started, with no time to spare. Everything seemed more rushed! I barely had time to get dressed in the mornings. I started wearing slippers to class. (I’d like to believe that it became a trend.) I started spending more and more time in FIRGA (the engineering computer lab) and it became a second home to me. I felt myself becoming a proper nerd, until one day when a brilliant idea crossed my mind. It was as if I had seen the light after being blind for many weeks. I didn’t have to slave away night after night, struggling on my lonesome; all that I had to do was become really good friends with the smartest people in our class. After all, I’m a people’s person. How hard could it be? My strategy worked. Life became a lot easier with all of the extra help. So to those who helped me pass my second year, I thank you.

And that brings me to now, third year. Who knows what this year holds in store? Surely not me, but what I do know is that whatever life throws at me, I’m ready for it. I conclude by challenging you, the reader, to accept whatever life may throw at you. Civil Engineering is no joke, but it is very rewarding…

And if things get too tough to handle, just remember that in a few years, with this degree, you’ll be able to build a bridge and get over it. 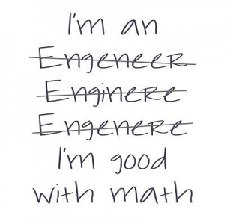 Tips that I would give to prospective students:

Contact us
We have moved temporarily due to renovations to:
LGS Decanting Building (next to CSIR)
Hammanshand Road
Stellenbosch 7599
Click here for more contact info
Copyright © 2021 Civil Engineering | Stellenbosch University All rights reserved. | Website by: Go2Websites.